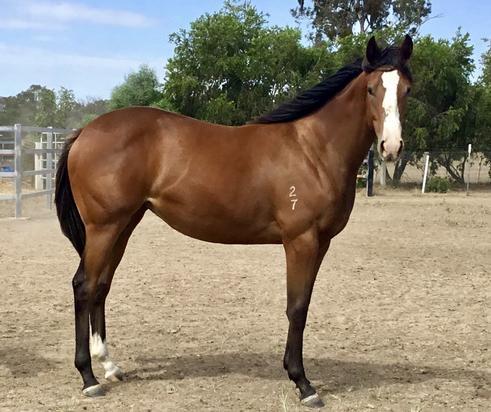 Want to race in this filly by the ill-fated son of Snitzel in Time For War a winner of two group races.

The five-year-old, a son of Snitzel who had served two seasons.

"Time For War was a gentleman, and a pleasure to work with," Stud manager Mick Malone said.

"He was shaping as everything we had hoped for.

Time For War was the closest resemblance to his father Snitzel as I have ever seen, and his foals now follow on, in type and attitude."

"He was a character and was loved by all."

The son of Snitzel had 53 live foals in his first crop and 68 in his second that are now yearlings.

Snapcrackle is a 5yo mare by EKRAAR - a son of Red Ransom and sire of Group 1 winners including SHEZ SENSATIONAL, EKSTREME, HABIBI and RISING ROMANCE.

Repetition has produced 10 to race for 7 winners including stakes placed Eleda.

Repetition is a full sister to G1 New Zealand Oaks winner SNAP and to the dam of KONTIKI PARK and from the family of G1 Melbourne Cup winner KENSEI.

40% is already sold! She will fill fast!